Finland is the number one coffee consuming nation in the world. In Sweden, coffee breaks are such a part of daily life that they have their own word. Here’s a gallery showing why I’ve learned to love it.

Finland is the number one coffee consuming nation in the world. In Sweden, coffee breaks are such a part of daily life that they have their own word. Today, I’ll keep the words to a minimum and let my pictures do the talking in this gallery of coffee break shots from the last few years.

One of my favorite cafes. Somehow wine and cheesecake became a thing. Actually, I’m probably waiting for my sandwich both times. Click to enlarge.

Having a bit of fun with scale in this shot. Mini coffee cup during vacation this summer.

Arabia Finland? Never been there.

During the same vacation, I bought a Sami hat. This particular photo is on Sweden’s national cinnamon bun day (Oct 4). The mugs are Finnmark. 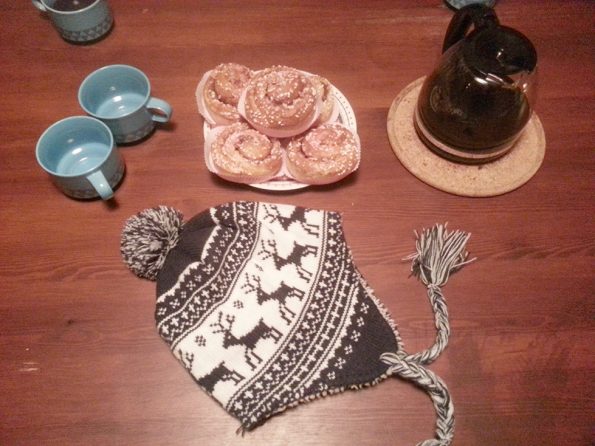 January 2015 my nephew came for a visit, and made us some “pumpkin” pie, using squash since real pumpkins are not found that easily here:

Later, we attempted our own – not bad.

Here’s a Pentik Finnish coffee mug I got as a gift last year. Probably from the 1970s. Unfortunately it’s also extremely hot to hold, and very heavy.

And Juhla Mokka is what I drink out of it:

Coffee break while working on one of my new books.
Wine glass is the famous Finnish brand Iittala.

Swedish “princess tårta” often eaten on birthdays, or just for the heck of it:

A cake baked for my brother-in-law’s birthday.

In Sweden, coffee cup stares at YOU.

As the days grow longer and spring creeps closer, we usually enjoy a fika outdoors.

There’s always that one guy who has to something weird with their food.

It may seem like an unhealthy habit, and I myself am not so big on sugar, nor was I a big coffee drinker when I first arrived. But in the end it’s about enjoying good times and laughs with family and friends; it gets us through the harshness of the nordic seasons.

Want to follow the blog? Just hit “like” at https://www.facebook.com/RyosaBooks/ to automatically get my latest posts in your feed!